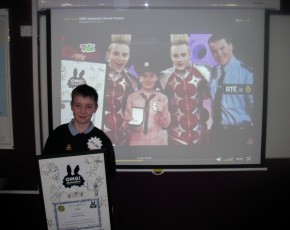 Congratulations to Sixth Class pupil Dylan Lavelle who appeared on the RTE TV Show OMG Jewards’ Dream Factory over the Christmas Break. Dylan was granted his wish to become a Garda for the day. He learned so much from his experience, such as how to take a finger print to how the Gardai watch the whole of the Dublin city centre on CCTV. Dylan’s dream concluded by him meeting Jedward in the RTE TV studio.

Why not log on to the RTE Player on the link below to watch Dylan in action.

View all posts by: Mr. McCoy